The Emu ostrich (Latin Dromaius novaehollandiae) is a bird of the casuariform family, it is a detachment of Australian ostriches (Latin Casuariiformes) of the genus of ratites. Endemic to the Australian continent. Australia's second largest bird. Emu is an element of Australia's coat of arms — it holds a shield. In nature, emu lives in open areas, overgrown with low-growing trees — bush. The general constitution of the body is a dense oblong body with a drooping tail; a small head on an elongated neck of a pale blue color — adapted to survive in the arid regions of the Australian continent.

«Emu» is a Portuguese word for «big bird». The bird justifies the name: body length — up to 2 m, height — up to 1.5 m, body weight — about 35 kg, maximum — 55 kg. The body morphology of the emu is adapted to travel rapidly over long distances. One step of the emu reaches 2.5 m, the running speed is up to 50 km /h. One march of the emu can last up to 20 km. This species of ostriches is endowed with sharp eyesight and good hearing — qualities that allow it to detect danger — predators at a great distance. The plumage in structure resembles fur, which acts as a heat insulator — during the day it protects the bird from heat up to 50 degrees, and at night from temperature drops of up to 35 degrees. Sexual dimorphism of the emu does not manifest itself outwardly, the male can be distinguished from the females by characteristic sounds, similar to grunting, in males a voice of a lower tone than in females. Another difference between an emu and an ostrich is three toes with three phalanges, an ostrich has only two toes. The legs of the emu are armed with sharp claws. The eyes of this bird are protected by a transparent membrane that protects the mucous membrane from drying out and getting dust. 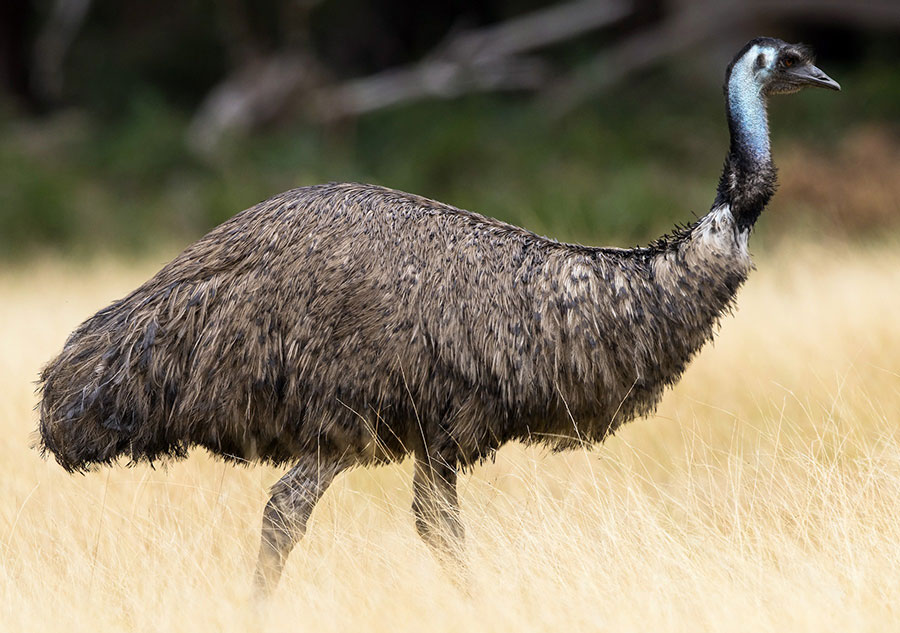 The emu is nomadic and diurnal. He eats mainly plant foods, the diet consists of fruits, roots, grass and crops, for which the emu visits agricultural fields. Emu augments its diet with insects. The mating season takes place in the first two months of winter — from May to June. Females lay 10-20 eggs in a nest-hole. The volume of one egg can be compared to 12 eggs of an ordinary chicken — about 800 grams. The incubation period lasts up to 8 weeks. The first year of life, chicks live near their parents. They will become sexually mature by the beginning of the fourth year of life. The lifespan of an emu is up to 20 years.

We have 4 of them — two pairs. They respond to names, and eat from the hands of visitors. Emus are not sociable. It is interesting to watch them from a distance. Come to visit us. A human does not feel at the top of the food chain near a large bird. This feeling leaves the correct impression on people that the phenomenon of life is completely unique in each case of its manifestation! This lesson teaches children to be caring and respectful of nature.