Lama (lat.Lama glama) is a camel of South America. Endemic to the Cordillera Mountains of Andes.. Llama was domesticated 4 thousand years ago by the Incas. For the first time this species of mammals cloven-hoofed animals were described in 1553, in the book of Pedro Cies de Leon "Chronicle of Peru". Ciesa de Leon — Spanish priest and soldier, humanist, historian, geographer, who became one of the first chroniclers to write about the conquest. The peculiarities of the llama are no humps, there are narrow feet, separated and movable fingers, a corpus callosum, a short tail and a long, hypoallergenic coat.

In Animal Park, there are several adult Guanáco lamas and their offspring (lat.Lama guanicoe) — these are the ancestors of the domesticated wild llama. Guanaco features — a slender body, a long graceful neck. The muzzle is longer and more graceful than that of the lama, but with the same arrogant expression — this is how the English naturalist and writer Gerald Malcolm Darrell described the lama guanaco.

Lama guanaco has a proportional build, like a deer, but a disproportionately long neck, like a small giraffe. The long neck is a natural balancer, with the help of which the animal absorbs the load on the legs in case of sudden changes in height while walking. A distinctive feature of the guanaco is its long and straight coat, the color of which can be of all shades of brown — from cream to dark. 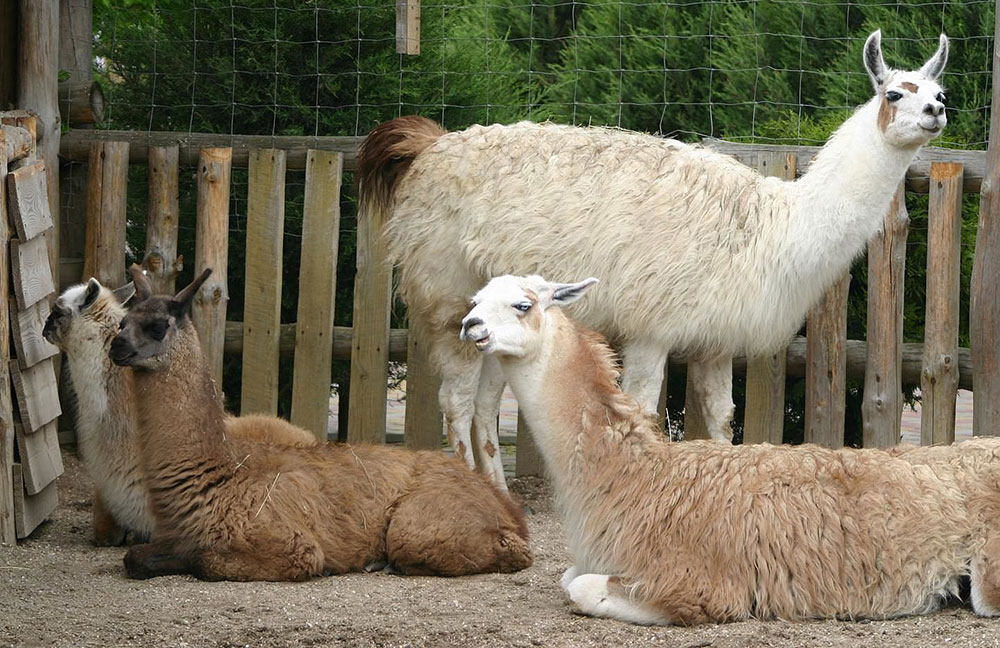 The natural habitats of guanacos are the pampas (steppes in the subtropical zone of the Earth), the semi-desert and the highlands of the Andes. The guanaco range extends from southern Peru to Tierra del Fuego. The domesticated llama is found at an altitude of 4 thousand meters above sea level. Llamas are social animals. They live in families — one male, several females and their offspring. Guanaco rut begins in August (in the north of the range) and ends in February (in the south). Pregnancy lasts 11 months. One is born, rarely two babies. Who will reach puberty by the beginning of the third year of life. The lifespan of llama guanaco is 20 years in the wild, 30 years in a park.

Guanaco — one of our most colorful pets. Due to their large size, llamas immediately attract attention. And the fact that such a large animal can be so cute and friendly — it inspires admiration in front of the wild!

Visit us at Animal Park. Our lamas participate in the rehabilitation program for special children (cerebral palsy, Down). Communication with a lama causes strong emotions in children, which children learn to control.