Lemur kata (lat. Lemur catta), he is also a ring-tailed lemur — a primate of the suborder of wet-nosed monkeys, the most common representative of the lemur family (lat. Lemuridae) as a contact animal. Endemic to Madagascar. In the homeland of the lemur, katta is called poppy. This type of lemur became the prototype for the hero of the animated film "Madagascar" — King Julian!

Lemur katta weighs about 3.5 kg, half of this mass is accounted for by the tail. A ring-tailed lemur can be compared to a slender cat, but with a larger tail. The length of the body varies from 35 to 45 cm, and the length of the tail is from 55 to 65 cm. The tail has characteristic black and white rings. Lemurs use their tail to communicate, with its help ring-tails inform others about their mood and warn each other about danger.

The natural range of the ring-tailed lemur extends over a limited area in the south-west of Madagascar. A largest population of lemurs lives in the Andringitra mountains. Their habitual is mountain tropical forests and open areas on the mountain plateau of the mountains of the same name, in which lemurs can extract enough plant foods. Although katta feeds mainly on plant foods, during long dry periods it can enhance its diet with invertebrates — snails and worms, and small vertebrates, for example, mice. 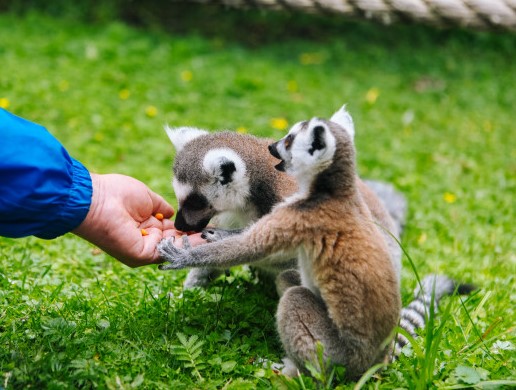 Lemurs breed once a year, and they are extremely reluctant to do so in captivity. But in our Park, newborn lemurs are born every year — this is a symbol of the fact that their parents in our Park feel at home! The lifespan of the lemur katta is from 16 to 19 years in the wild and up to 25 years in the conditions of reserves and zoological parks!

Ring-tailed lemurs are our most contact pets! By their example, it is most obvious that our pupils make contact with the guests of the Park not because they want to eat, but because they want attention and communication with people. Come to visit us! Observing the human curiosity with which lemurs observe humans, the question of the origin of humans should be considered open again!