Phasans (lat.Phasianus) are a nominative genus of the subfamily of pheasants (lat.Phasianinae) and the family Phasianidae, the order of chickens. The genus consists of two species — 1) common (32 subspecies) and 2) green pheasant (endemic to the islands of Japan Honshu, Shikoku and Kyushu). Introduced by humans in Europe, North America and Australia (about 50 countries). The pheasant symbolizes virtue, prosperity, luck and beauty — because of these symbolic images, the pheasant was the emblem of one of the twelve regalia of the Chinese Emperor Yu (reigned from 2699 to 2588 BC), and in Georgia the pheasant is a gift the ancient Georgian goddess of the forest Dali, to whom the goddess singled out her subjects as a sign of eternal love and devotion.

The etymology of the name

«Pheasant» comes from the name of the city of the same name Phasis — this is the city of the Georgian kingdom of Colchis, from where, according to the legend of ancient Greek mythology, the Argonauts brought pheasants to Europe.

Pheasants differ from other representatives of the pheasant genus in that feathers grow on their heads. Only the areas around the eyes remain unfeathered. Pheasants are a rather large species of birds, their body length reaches 89 cm, and their body weight varies between 1.5 and 2 kg. Sexual dimorphism — males are noticeably larger than females. In males, feathers are cast with a metallic sheen, females — in a gray-sandy color. 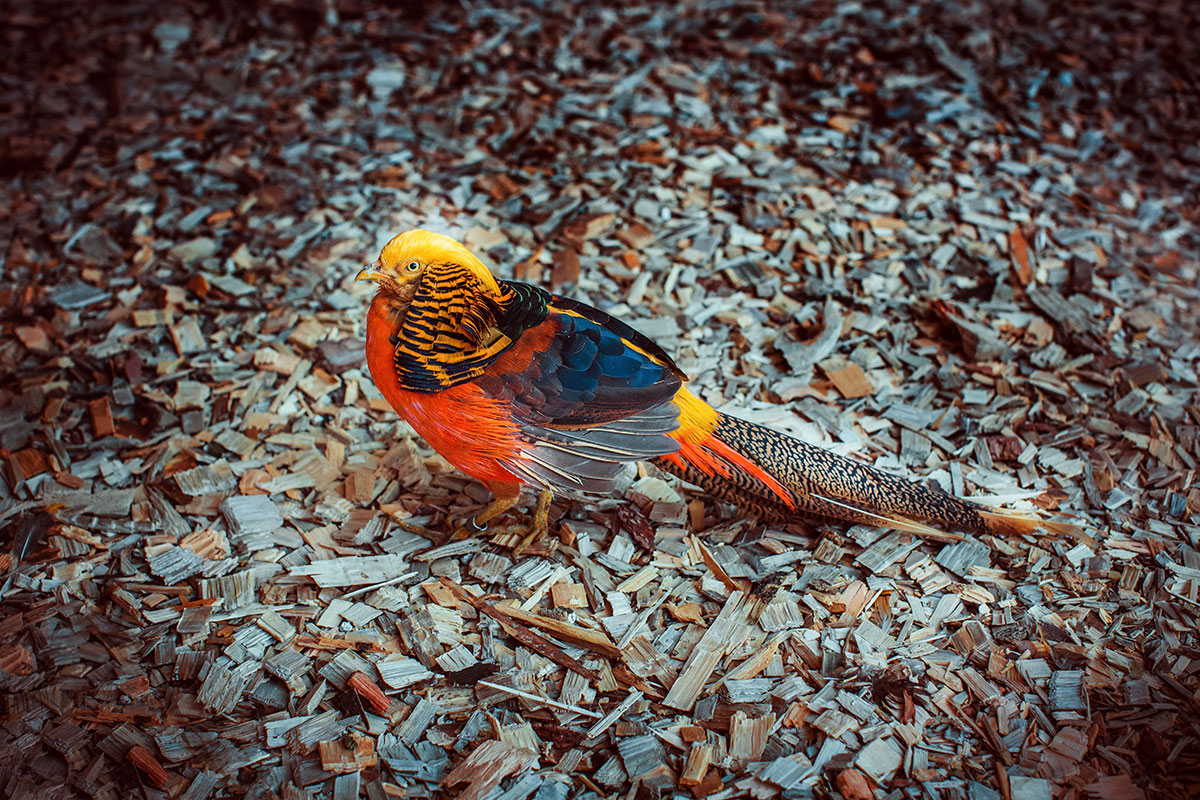 In the natural environment, pheasants live in thickets along river valleys and lake shores, as well as in river reed valleys. Pheasants look for food in forests with undergrowth, or in thickets of bushes. They feed on grains, fruits of wild-growing fruit trees, berries and shoots of leaves of young trees. They enhance their diet with insects, molluscs and worms.

Paradox — in the wild, pheasants lead a monogamous lifestyle, in parks and reserves they are polygamous. Pheasants nest on the ground. In early spring, 10 to 20 eggs are laid, the incubation period lasts 3-4 weeks. The life span of pheasants is 12-15 years.

Animal Park is home to golden (golden) pheasants. The natural population of these birds lives in China. The first golden pheasants were brought to Europe from China at the end of the 19th century. They are the decoration of our Park. With their presence, pheasants create an atmosphere of fairy tale and mystery, which is interesting to watch. Come to visit us to become the heroes of a modern fairy tale at least for 2 hours, the plot of which you can come up with yourself!