Lemurs (Latin Lemuriformes), they are also lemuriform — a detachment of primates from the suborder of semi-monkeys (Latin Strepsirrhini). The suborder unites all lemurs living on the island of Madagascar.

A common feature of lemurs is the protruding incisors and canines of the lower jaw, as well as a disproportionately long tail and an elongated claw on the second toe of the hind legs. More than 60 species of lemurs are known to science. Species differ in size, weight and appearance. For example, pygmy lemurs weigh 30 grams, and some short-tailed indri weigh 10 kg. Lemurids were divided into species about 50 or 80 million years ago. Then they inhabited Asia and Africa. But they survived as a species only on the island of Madagascar and the Comoros — these are closed ecosystems into which the higher primates could not penetrate, and therefore lemurs occupied all the ecological niches that they had to share with competitors in Africa and Asia and, unable to withstand competition, became extinct.

The name "lemurs" comes from the mythical ancient Roman "lemurs", which, for their characteristic mask and shrill cries issued every 40 minutes at night, by ancient sailors sailing past the island of Madagascar, were called larvae — ghosts.

The anatomical feature of the vari lemurs is that they are the largest of the still-extinct lemurs. So, the length of their body is 1-1.2 m, the length of the tail is up to 0.6 m, and the body weight is about 4 kg. Lemurs do not have claws, but they have nails. The life line is visible on the palms, like in humans. They jump up to 10 meters. Females are larger than males. 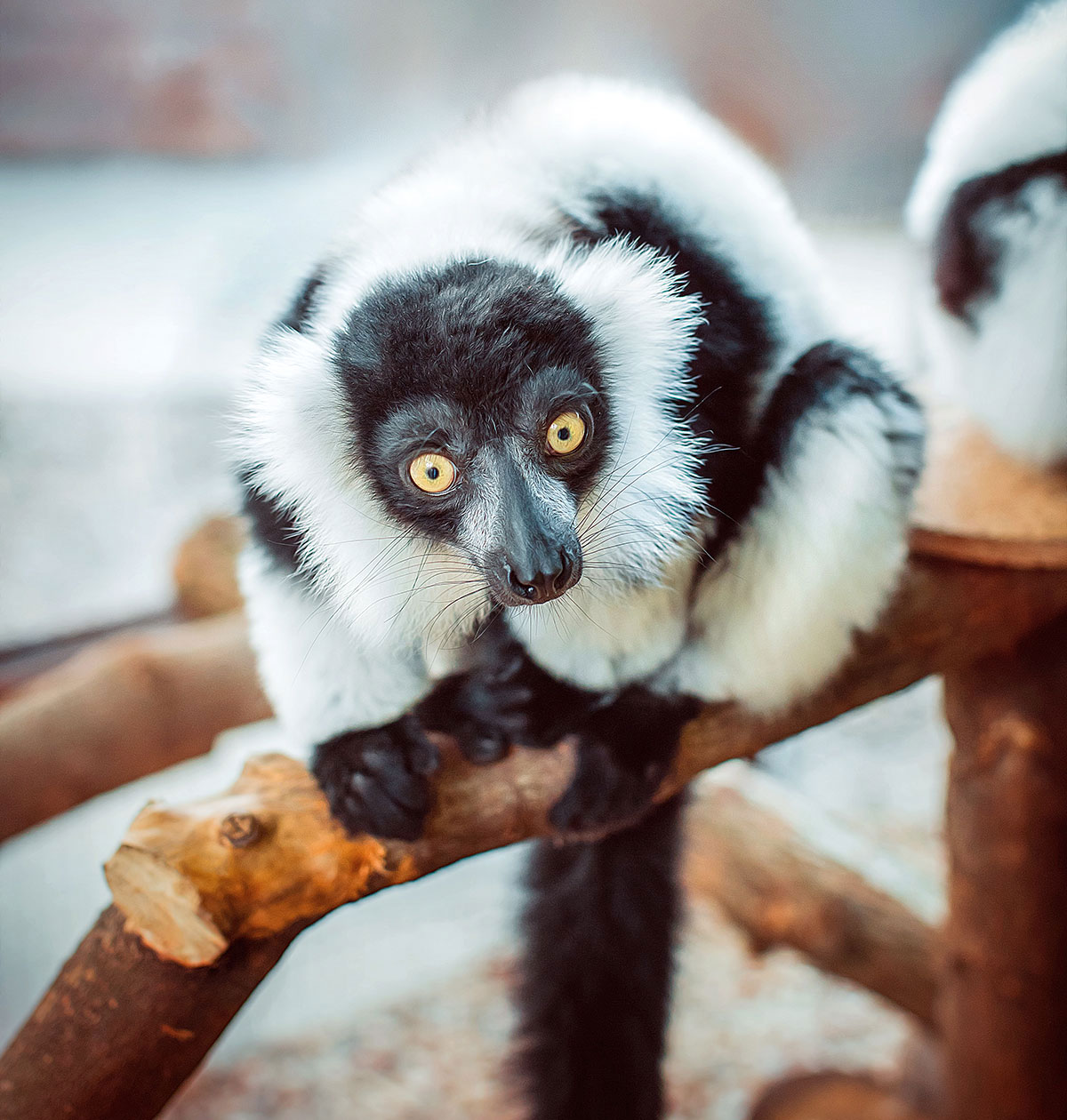 In the wild, varie lemurs, unlike most other species, are diurnal, and unlike monkeys, terrestrial. The mating season of lemurs lasts two months in spring. Pregnancy lasts 4-4.5 months. They are born one at a time, less often two babies. The lifespan of lemurs in the wild is up to 15 years, in the conditions of reserves and parks — up to 30 years. Lemurs have a long tail, which they do not cling to tree branches like monkeys do. Lemurs use the tail to communicate with each other — its shape informs the surrounding relatives about the mood of the owner of the tail and about what is happening around, for example, about danger. Lemur is a social animal, they live in families led by females. They sleep in a tangle, inside which they hide the most valuable thing — babies. The social structure of lemurs is hierarchical. They feed mainly on herbs.

In the interactive zoo Animal Park lives a family of lemurs (lat. variegata Varecia variegata), they are also know as black and white lemurs — these are special endemics of Madagascar, which in their homeland, due to the aggressive cultivation of wildlife by people, are threatened with extinction. Our pets respond to the names of Roma and Rome. Lemurs are extremely reluctant to breed in captivity. But in Animal Park for lemurs there are such conditions under which Roma and Rima give birth to one baby every year. Come to visit us to observe the wisdom of nature of our pupils. After 1.5 hours of observing wild animals, your faith in civilized people will be revived.